WIND, RAIN, JOY, SORROW — WE’RE ALL IN THIS TOGETHER
gail threinen

Minnesota Bridge ….. a Cultural Bridge Between East and West

I dance when I create an artwork. I dip and sway in tandem with the push-pull-lift of the brush. I try to breathe with the rhythm of the poem or image (sometimes I have to remind myself to breathe!) For me, brush-writing and painting are deep meditations. I receive relaxation and joy from the process, and I hope my viewers receive something special from the finished piece.

I am honored to exhibit my calligraphies internationally including in Taiwan, China, Korea, Thailand, Paris, New York, and multiple U.S. states, as well as at the Sumi-e Society of America annual exhibitions.

When I first began vertical brush-writing in English, inspired by the grass style of Chinese calligraphy, I used it as vase décor on a series of full page flowers-in-vase paintings. My next major calligraphic project was a series of 30 silk panels (72″ x 14″) on which I used silk dyes with brush painting techniques and vertical brush-writing in English.

I reached a point where I wanted to create large artworks composed entirely of calligraphy, but I wanted the words to be my own. In order for that to happen, I realized I needed to spend more time and effort on the art of “word-crafting”. So my work evolved from one-liners on vases to large stand-alone calligraphic poems.

I don’t speak Chinese (or any Asian language) except at a two-year-old level. I don’t read or write it, except for a small number of specific characters. It was (and is) exciting to create the works from my own experiences – both the poems as well as the language of the brush-writing. I have created calligraphic artworks in horizontal, vertical and abstract writing formats, all based on brush-writing in English. These works always begin with a poem that I have written myself.

Like my paintings, my poems and calligraphies are very personal. Some are long and complicated, others are sparse and pared down. Once the poem is written, I plan the artwork composition.

What does composition have to do with calligraphy? My calligraphy composition is about letter and word placement, spacing, movement, tonal qualities, and energy. Even to those who read the language, it’s often difficult to recognize and comprehend grass style or “non-conforming” calligraphy because it’s so personalized. With a successful composition, even if one doesn’t understand the writing, the calligraphy work itself becomes an abstract painting. This is true no matter the language.

I’ve always felt very strongly that calligraphy needs to be confident and filled with energy, or “chi”. It’s so much more than a written thought, and the way in which it’s executed helps to convey that. In personalizing my brush-writing, I pay great attention to the strength and energy of every brushstroke, as well as that of the overall composition. I try to match the mood of my brush-writing with both the meaning of the individual words, as well as the mood and meaning of the poem.

My formal study of calligraphy began over 45 years ago, and I’ve spent many hours practicing and experimenting in the same way that I’ve practiced and experimented with painting techniques. The goal, of course, is always to reach the point where it’s not necessary to think, but to just do. It’s that wonderful place where the brush moves by itself and the work is alive.

Calligraphy Artwork Translations (on the artwork, read from top to bottom, left to right)

Ode to the North Shore 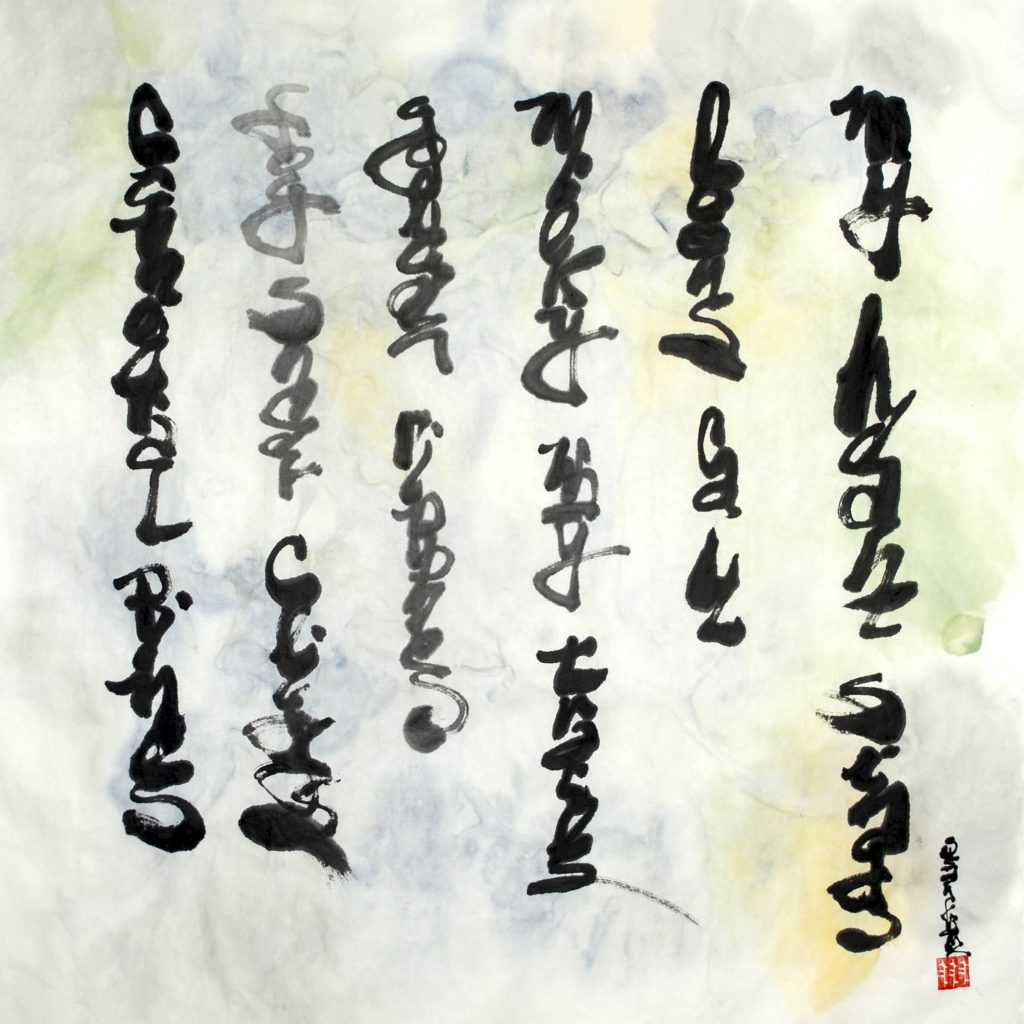